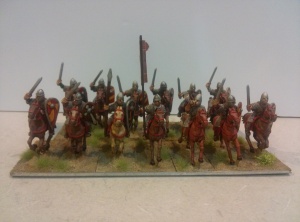 A key part of my Later Byzantine Army is the inclusion of Western Knights.  Keeping with the WAB A0A2 lists, these ‘Western Knights’ are relatively generic in WS and Armor for mounted troop types armed with lances.

When doing my historical research, the few things that were impressed upon me was many ‘Western Knights’ in Byzantine service

were more akin to Mercenaries than they were to any Knightly Order or Household Cavalry which originated in Western Europe.

Much of the equipment looks like a mixture of what would be typical for a Byzantine Cavalryman and a Frankish Knight or Sergeant.  So using Crusader miniatures, I mixed in both Early Medieval Spanish with Norman troops.  It got me close to the look I

was wanting, but still being easily identifiable as ‘Non-Byzantines.’

Again, these miniatures were painted using Army Painter brand paints and washes.  Little Big Men Studios decals and banners were added after they were done.  Here they are for your review.