Normally, I don’t make too many comments regarding games I don’t win,  but I feel a need to do so today.  A few days ago I played a game with my Dark Age (early) Saxons vs. an Late Imperial Roman Field Army.  As far as historical match-ups we both felt pretty good about it.  We agreed on 2500 points and went at in on a standard battle.  My opponent brought 3 large blocks of legionaries and a couple of smaller blocks of Auxilia and a unit of supporting archers and 2 units of cavalry.  While I have played WAB for over 10 years, when I get a good ass-kicking, I really think it is time to talk about it.

The real strength of the Late Roman Army was the combined formations.  Each unit (depending on its size) had between 6-8 archers included.  Against my poorly armored Saxons, this really proved to be the pivotal issue.  Each turn (after turn One) I received no less than 50 bow shots at me.  I found myself, in order to attempt a win (which is always important…LOL) having to go to my enemy, due to attrition.  While I had some short bow armed skirmishers myself, I had no ability to go arrow shot for arrow shot against him.

The few units that he engaged with that were not infantry (namely Equites) were easily destroyed by my own cavalry unit and elite infantry.  The real test for my army was approaching the shieldwall of his legionaries.  While closing, the combined dart and bow fire proved devastating and caused a critical charge by my cavalry to fail.   In the end it was a solid victory for Rome.  While I played a Fall of the West Army prior to the release of AoA2, I hadn’t gone back and checked out how the army may fair now.  I think for the astute player, a Late Roman Army has a lot of great bells and whistles that should not be ignored.  This is definitely an army that has been resurrected from the dead for possible use in the tournament scene. 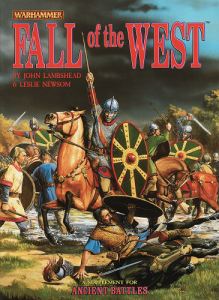 One thought on “The Late Roman Legion”