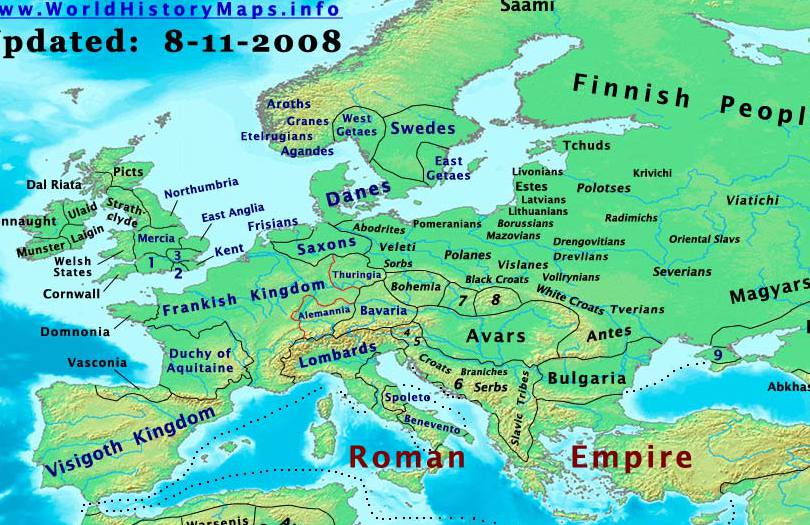 This is a map of Europe in 700 AD.  The area referred to as the Roman Empire is in fact Byzantium.  This should show the rough geographical boundaries of territories for each of the armies in play.

Regarding the campaign itself, each army will begin at 1500 points with lists chosen from AoA2.  The time period is from the Fall of the West until the rise of the Arab Caliphates (450-750 AD).  Any army which existed within this time period can be played.  If a specific version of an army listed (for example Thematic Byzantines includes a later list, such as Tagmatic Byzantines) you must use the list which existed during the time period (so Thematics are in, Tagmatics are out).  Players may make alliances with other players who have appropriate allies listed within there army list.  This ‘peace’ means that these players will not act as aggressors towards each other during the campaign until formally declaring war (which ends the option for taking allies).  Players may not take allies from lists not represented by other players (makes thinks a bit tougher) after round 1.  Teams (2) of allied players may challenge other allied teams for a 2 on 2 style game, but are not required to do so.

After 6 weeks of play (3 Saturdays equaling 1 round of the campaign), the armies will expand to include 500 additional points.  The top 4 scoring players will be given random ‘victory awards’, beginning with 4th place player.  The next player may choose to draw a new victory award or take the one already drawn and force the lower seated player to re-draw.  The next player (2nd place) can then take either lower seated players award or choose to draw and so on. The victory awards are not unlike the Age of Arthur trait system.  Additional 500 point increases and awards will occur each additional 6 weeks until 3000 points is reached (and 3 more games played).  The top 3 winners will receive some serious swag from the Historical Wargames Podcast Sponsors.

End of Campaign Round One victory awards:

Hardened Body Guard–  The General’s unit (which he must join at the beginning of the game) becomes stubborn for the duration of the game.  If the General leaves the unit then the unit no longer counts as stubborn.  If the unit is destroyed* in HTH or the General is killed, the victory award is also lost.

Well-supplied– The army gains a bonus of 10% additional points in which to construct an army list (i.e. an army normally restricted to 1500 points could be increased to 1650 points).