As of today, Warhammer Historicals is offering on their website the long anticipated Armies of Antiquity for WAB 2.0.  This is great news for all WAB enthusiasts. 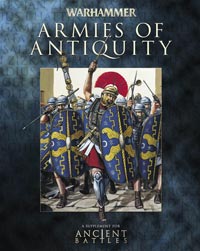 For any of you who are interested in 28mm Historical Wargames (in particular Ancient Battles).  There is currently some discussion regarding if a WAB or COE event will be included in the next ENFILADE event, sponsored by the NORTHWEST HISTORICAL MINIATURE WARGAMES SOCIETY this coming MEMORIAL DAY Weekend (May 26-28).  If you are interested make sure to contact me via email (through this site) or the NHMGS/Enfilade events coordinator at kgsmyth@comcast.net

Both WAB and COE are designed for experience and newer players alike.  Anyone familiar with any Gamesworkshop game system(s) can quickly master either rule system.

I recently got an email asking me for some advice regarding the effective use of skirmishers in WAB.  Here is the question, I got some Greeks and what to know what skirmishers to take and how to use them as I am a newer Warhammer Ancient Battles player.  Since I don’t know what supplement you are taking your Greeks out of (I will assume either AoA or Alexander the Great), but I will give you some general things to remember.  These are my suggestion and I am sure some people will disagree.

2.  WS 3 models (such as peltasts and Agrianians) are premium skirmishers.  These troops will normally dominate melee combat against WS 2 troops  (other skirmishers) .  Some light infantry (by definition) can be used as open order troops or skirmishers…it is worth checking out every available option.

3.  Don’t be afraid to engage formed units in terrain.  Close Order (not open order) units loose rank and close order bonuses while in terrain.  This is one of few times that your skirmishers can reek some havoc.  You probably won’t win too many combats, but it is the best chance you have to delay some normally unstoppable units.

4.  When in doubt, take javelins over all other missile weapons.  Skirmishers should be moving (double moving) and screening troops.  And although you won’t be shooting as much, when it is time to fire or fire and flee, you will hit on at 4+/5+ and might do some damage.  If you want to take a dedicated archer or slinger unit, use them as support, not skirmishers.

6.  Remember skirmishers can never use a character or generals leadership.  Nor may they use the effects of a Army Standard, unit standard or musician.

7.  Most importantly, remember that skirmishers die…they die often and don’t get too attached to them.

Ok, I have been seeing a lot of talk about an upcoming WW1 event on the NHMGS website and want to see if we can get one organized here locally.  If you are interested (even if you don’t have an army), get a hold of me and I will try and coordinate a one day round-robin event in the Tacoma area.  Just give me an email at socalwarhammer@yahoo.com .  If you have an army, let me know what you have and if you have 1000 points ready to go.